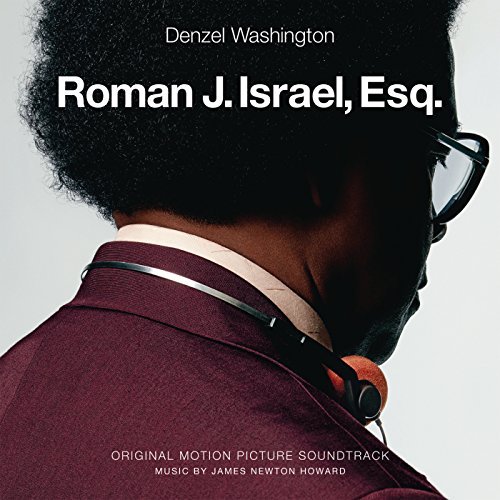 Composer James Newton Howard has had a very busy time recently. He has not only written music but he has also prepared his first ever European tour covering 15 cities. Preparing such a big tour is a huge undertaking and needless to say it must have been quite an effort to not only finish his scoring assignments in time but to also pick and arrange the pieces for his concerts. Since James Newton Howard is no stranger to tight schedules, everything seems to have turned out fine.

The tour is in full swing and I have been lucky enough to experience James Newton Howard live and I must say that his concert was absolutely phenomenal and at times even mind-blowing. One of the projects James had finished recently was the legal drama Roman J. Israel, Esq. The film stars Denzel Washington and was directed by Dan Gilroy who James had already worked with on Nightcrawler a few years ago.

Legal dramas and or thrillers can be a difficult affair when it comes to scoring them. Quite a few of those have very little score or the score they do have feels somewhat uninteresting. This of course varies from project to project and there are movies in this genre that have a gripping score.

For Roman J. Israel, Esq. the director picked one of the most brilliant film composers of all time – James Newton Howard – a composer who has the ability to adept to any kind of genre. His range is enormous and he can certainly tackle everything. The score James wrote for this particular film feels very solid. It is not particularly spectacular or memorable. However, it does have that special James Newton Howard magic in places.

In “Supreme Court of Absolute Universal Law”, James introduces one of the principal themes which was wonderfully arranged for choir. He has written for choir on many occasions and this piece showcases his ability to use voices to create the right atmosphere.

James is not only a master of huge and complex orchestral writing, but he also understands how to incorporate electronics into his compositions. “Just Continuances” is a good example of just that. He mixed organic instruments with nice synth sounds.

By and large, the music feels subtle. It is never intrusive or feels out of place. The score also features some nice brass and string work. However, I felt that his choral writing stood out the most. James also throws is some acoustic guitar. By doing so, he manages to create a very pleasant listening experience which is further intensified with his elegant string writing.

This album certainly isn’t the best one of the year. Neither is it one of James’ best scores. However, this 40 minute album presentation does offer some very fine moments. There is choral beauty, some of James’ trademark string work and elegance. James also nicely varies the instruments. To me the piece “Maple Glazed Donut” stands as one of the true album highlights. This playful, entertaining and simply gorgeous piece of music is a true treasure. The piano playing is spot on and you just have to love the “lounge feeling” it provides.

Besides the subtle and beautiful moments, James also throws in some more intense compositions – “Guard! Guard!” Yet, the music does not become intrusive and I never really felt uncomfortable. It is a decent score, which probably won’t top the list of the best scores of the year or James’ career, but in the end I felt that most fans of the brilliant composer will probably conclude that there is some fine music on this album. “Filing The Brief” is a nice suite which reprises the principal themes. It is the second best piece on the album. The choir shines brighter, the orchestration is bigger and all in all, it is a very effective piece of music. For some listeners it may be a “filler album”, but to me it is further proof of the composer’s ability to come up with music for any kind of genre. James Newton Howard has many scores left in him and one can only hope that he will continue to enrich this business with his musical brilliance for a very long time.